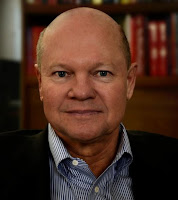 Novelist and Atlanta native, David Darracott, has been named 2015 Georgia Author of the Year for his suspense novel, Wasted, in the detective/mystery category.  The GeorgiaWriters Association announced winners on Saturday June 27, 2015 at its annual banquet at Kennesaw State University.

A resident of Forsyth County and frequent speaker at libraries and literary gatherings, Darracott said he was gratified and appreciative to receive such an honor. “I’m extremely pleased,” he said, because “we writers often toil in the dark with little reward or recognition for the work we do or the arduous careers we lead, so it is particularly gratifying when we win tribute from our fellow writers.”

In her comments about his winning entry, the judge, Melanie Sumner, wrote:

Darracott writes this suspenseful story with tight, polished prose, allowing his characters to reveal themselves with authentic, controlled dialogue.  The carefully chosen details of his settings, such as the protagonist’s old Triumph and his modest house outside of Decatur, Georgia, with an inch of pine needles on the roof, and a cracked concrete driveway, bring the reader smack into the middle of the story.  More exotic scenes on the Caribbean are illustrated in detail that is both exquisite and essential to the plot . . . the characters of Player and Sharpe are well-portrayed . . . a brilliant ending reveals the subtle satire . . .  and with that Wasted becomes a profound novel, as well as a good read.

In its 51 year history, Georgia Author of the Year has been granted to some of the state’s most distinguished writers of fiction, nonfiction, and specialty books.  Philip Lee Williams of Athens received the association’s Lifetime Achievement Award for his many contributions to the field.

Darracott is a native of Atlanta and a graduate of Emory University.  A longtime writer of nonfiction for magazines, television, and film productions, his parallel career in fiction is “why I keep writing." He is also author of the novel Internal Security as well as some short stories. He holds a Masters degree in English and received a Hambidge Fellowship in 2009-2010. Though fiction is his passion—first, last, and always—fly fishing and golf run a close second. You can learn more about his work on his website and locate his books at amazon.com.