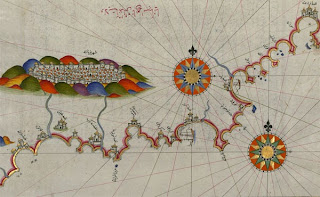 Muslims today make up the second-largest religious community in the world. From Senegal to Indonesia, Muslims share certain fundamental principles and practices, but express their religious beliefs in a wide variety of ways. Readings for this theme explore the basic tenets and requirements of Islam and the relationship between the three Abrahamic religions: Judaism, Christianity, and Islam. They also take a look at the divergent paths followed by the Sunni and Shia communities and the mystical routes to spiritual fulfillment known as Sufism.

The Muslim Journeys Bookshelf given to the Atlanta-Fulton Public Library System includes books selected to breathe life into Western understanding about Muslims throughout the world. We invite all of our patrons to check out this rich collection of materials at the Central Library!

The Children of Abraham: Judaism, Christianity, Islam by Francis E. Peters: How do scripture and tradition relate to one another? What does “worship of God” mean in each of the three faiths? How does it compare across the three faiths, and how is it different within each of them? This seminal work, recently updated, compares and contrasts these three great faiths.

Muhammad: A Very Short Introduction by Jonathan A. C. Brown: Learn the facts of the Prophet Muhammad’s life from this short, readable book. It also helps Westerners understand how early Muslims themselves gathered this information for those who would come after them, and to understand the special place the Prophet occupies for Muslims.

The Story of the Qur’an: Its History and Place in Muslim Life by Ingrid Mattson: Many Westerners find the Qur’an bewildering. This well-written book explains how the Qur’an was revealed and recorded, and places it in Muslim culture through history. Written by a Western Muslim scholar, it illuminates the Qur’an for non-Muslims while conveying how Muslims view their sacred text.

Koran By Heart: One Chance to Remember: Qur’anic recitation is an art and is carried out in many ways, varying from spiritually satisfying basic rhythmic recitations to advanced types of chanting that can be very moving. This 80-minute long HBO production chronicles one year at the world’s oldest and most prestigious Qur’an-reciting contest in Cairo. Follow 110 young people from over 70 countries as they come together for this event to compete and learn from one another.

The Art of Hajj by Venetia Porter: Illuminated manuscripts, wall paintings and photographs, calligraphy, textiles, scientific instruments, decorative tiles, maps, ceramics, metalwork, and powerful works by contemporary artists, are complemented with explanatory narrative and quotes from the Qur’an and traditional literary sources to demonstrate this exciting “pillar of Islam”.

Rumi: Poet and Mystic, edited and translated by Reynold A. Nicholson: Jalalu’l-Din Rumi (1207-73) was one of the great Persian mystical poets. Through this collection of lovely translations, the reader is introduced to Sufism, a mystical side of Islam. The poems describe Rumi’s longing for and experience of the divine. He believed that in the great mystery of existence we are all united, a revelation that has made him one of the most popular poets in the world.