The 2012 National Book Award winners have been announced! This prestigious award, established in 1950 and supported by the National Book Foundation, is an American literary prize given to writers by writers. The four award categories are Fiction, Nonfiction, Poetry and Young People's Literature. Each year a panel of 20 distinguished authors, including several from each of the four categories, are selected to judge the nominated titles published by American authors in the current year. Writers such as William Faulkner, Flannery O'Conner, Phillip Roth and Ralph Ellison have all won this prize.

Three of this year's winners can be found in the Atlanta-Fulton Public Library System, so be sure and check the catalog now to place a hold on your copy! 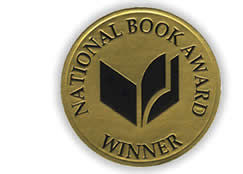 Fiction:
Louise Erdrich, The Round House

For a complete list of the nominated authors, most of which can also be found in the library's catalog, and more information about the award, including video of the ceremony, visit the National Book Foundation's website.
Posted by AFPLS at 9:46 AM